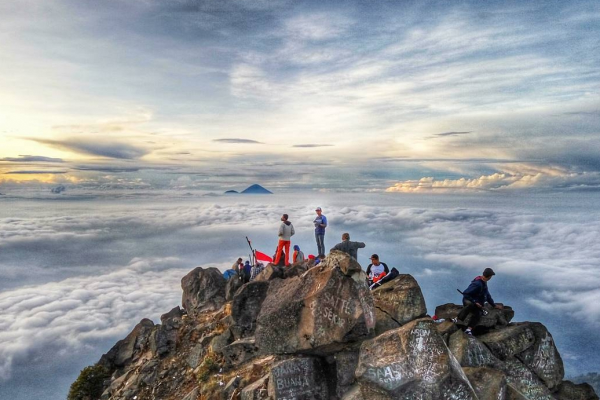 In addition to Mount Semeru and Mount Lawu, East Java also has a mountain that attracts climbers, namely Mount Arjuno, which also has its own story. Mount Arjuno is one of the many volcanoes in Indonesia in East Java. The mountain which last erupted in 1952 is located on the border of Batu City, Malang Regency. This mountain is one of the mountains which is a favorite destination for hikers. The name of Mount Arjuno itself was inspired by the naming of one of the legendary Javanese Wayang figures, namely Arjuna.

Including the Top 5 Highest Mountains on Java Island,
Mount Arjuno is located at an altitude of 3333 masl, which is ranked as the third highest mountain after Mount Semeru and Mount Raung. And is ranked fourth highest on the island of Java, with a height of more than 3000 meters, you must prepare equipment and physical before climbing.

Montane Swiss in Java,
During the climbing trip, you are not only presented with the beauty of the natural surroundings but there are also several tourist attractions, such as the "Grandfather Bodo" ​​waterfall tour which is one lane with the hiking trail. On the slopes of Mount Arjuno there is also the Berantas River, the longest river on Java Island after the Bengawan Solo River. Because it is managed by the Great Forest Park Raden Soerjo, Mount Arjuno has a forest area like a forest abroad that is suitable for camping activities with family or friends, such as the Montane forest area, Switzerland.

Mystical mountain,
Not just gossip, some climbers of Mount Arjuno have experienced a mystical story that happened.  That sometimes happens when climbing through an area called "Alas Lali Jiwo", or commonly called the forest of self forget which is quite well known haunted. That said, if you has bad intentions towards this forest, then you will be harmed in the Alas Lali Jiwo area.

Another famous awesomeness is the existence of the demon market and the sound of gamelan (an old Javanese musical instrument game) that is often heard by climbers. The story of some climbers who have experienced mystical events while in the vicious market like being in the crowd of a real market but some transactions made, such as money turned into leaves. Meanwhile, regarding the sound of gamelan according to the belief of the local community there will be havoc for those who hear the sound of Gamelan, because the person who hears it will be chosen to be married by a supernatural figure or in Javanese language is called "ngunduh mantu".

Has 4 hiking trails,
Mount Arjuno can be passed by climbers through 4 lanes namely via the Tretes track, the lawang path, purwosari path, and the stone path.

The following is a detailed review of the Java Private Tour regarding the four tracks:

Tretes Path, traversed from the famous tourist Tretes with waterfalls such as the Grandfather Bodo waterfall.  Traveling through this path takes about 7-8 hours.  This path is quite gentle and this path also leads to the summit of Mount Welirang.

Lawang Path, This pathway is a practical route because it is easy to get to this route from Surabaya and Malang. If you go through this path, you should spend more time because the track is quite long, but during the trip you will be treated to views of the tea gardens, the Oro-Oro Ombo camp, meadows, and Alas Lali Jiwo.

Purwosari Path, This pathway is quite challenging after Lawang because it will pass Abiyasa Cave, Petilasan Eyang Abiyasa, and Eyang Saktri Site.  The journey through this path starts from Tambak Watu Village, which runs along the path.

Batu Path, to get to the top of Mount Arjuno takes about 10 hours, and this path is the best path to enjoy the panoramic view of the surrounding nature.

Do you plan to explore Java in the near future?. Plan and realize your adventures with the Java Private Tour, you will feel arrive as a guest, and leave as a friend.  Discover the true meaning of Java with Java Private Tour!

*Click HERE to find out more information about our Java-Bali Trip.